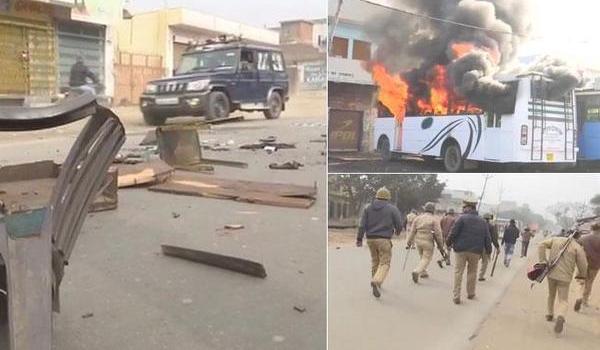 Kasganj is a conspiracy of ‘Sankalp’: Rihai Manch

Communal voilence in Kasganj is a conspiracy of ‘Sankalp’: Rihai Manch

Need a high level probe of ‘Sankalp’ for inflaming the communal violence.

Home minister, Chief minister and the administration had prior information of the fear of violent activities.

Kasganj/Lucknow-. Rihai Manch deemed the organization of youths named ‘Sankalp’ the main conspirator of Kasganj communal violence. President of ‘Sankalp foundation, Anukalp Vijay Chandra Chauhan, posted a lengthy video on social media and Facebook after the death of Chandan Gupta wherein he warned the Muslim community of dire consequences. After that the incidents of attack and loitering of houses and shops of Muslim continued for the next two days. Rihai Manch leaders Rajeev Yadav and Mohd. Arif concluded their two days visit of the affected areas on 29TH  January where they met victims and those wounded in the communal violence. Rihai Manch leaders found that Kasganj violence was prima facie preplanned and executed and police knew all about it.

The duo said that unfurling of national flag programme at Abdul Hamid tri-way in Baddu Nagar was disrupted by Hindutva organization ‘Sankalp’ where they forcibly took the march with saffron flags and fire arms in their hands shouting provocative slogans like “Hindustan me rahna hai to vande matram kahna hai (If one has to live in India he will have to recite vande matram) and Hindi hindu Hindustan, Katuye bhago Pakistan circumscised ones i.e. Muslims go to Pakistan”. After that the pre planned communal violence was committed as and the police remained silent spectator. Police resorted to firing only after the situation went out of control in which Naushad was injured and Chandan Gupta died in dubious circumstances. This so called tricolor march was also taken out under the leadership of Abhishek @ Chandan Gupta, the video footage recently surfaced confirm it. It was also found out that ABVP activists with saffron flags and country made pistols were there in the so called tricolor march. It seems that this tricolor march was pre planned and brought out jointly by them with the aim of creating mischief and when the march reached the Muslim majority area provocative slogans were raised consciously that resulted into scuffle with the people already gathered there for hoisting flag.

It is notable that permission of authorities was not taken for the so called tricolor march and neither they were informed of it. It is also worth knowing that the Abdul Hamid tri-way where Muslims had gathered to hoist the flag is situated in a narrow lane and not on the main road. Therefore, storming to programme venue with hundreds of bikes waving saffron flags, raising slogans and threatening to recite Vande Matram is nothing but a part of well planned conspiracy. After it tension mounted and the police administration was informed of it but the police did not react immediately as the situation warranted. As a result Kasgang violence was executed and communal elements of so called tricolor march, who were already armed, indulged in loot and arson.

During the visit of Rihai Manch leaders it was also found that preparations for the communal violence were well planned. It is told that there was a dispute between members of Sankalp foundations and Muslim youths for a long time on facebook where more than a thousand comments were made. After the very dispute secret meetings were held of Sankalp foundation members. It was due to these apprehensions the Sankalp foundation vice president Aayush Sharma @ Pandit Ji (self proclaimed youth leader with more than 8,000 followers on facebook) tried to caution the home minister, chief minister as well as UP police, via twitter. Aayush Sharma has himself said it in his facebook post. See the link –
https://www.facebook.com/realayushsharma/photos/a.1736036406692434.1073741828.1557622727867137/1767004310262310/?type=3&theater

Similar communal comments are still continuing on the facebook wall of Aayush Gupta as those prepared the ground for the riots. Even after media reports hold the social sites responsible for the outbreak of riots no measures taken by the administration show the amount of negligence on their part. Rihai Manch demands action against those who made provocative comments in a tense situation like this.

It is evident from the facts that the members of Sankalp foundation were well aware of it and one of them Aayush Sharma had even informed about it. On the night of 25 January Aayush Sharma through a message on facebook cautioned the SSP even then it was neglected and communal elements were given full liberty to gather arms for the violence. SSP Sunil Singh, in a statement, had not ruled out of political stratagem after which he was transfered and asked to leave the station immediately. Member parliament from Etah was not only permitted to go there but also make inflammatory speech, it proves political protection to pre planned incidents of violence. It was overheard in the same video that man in uniform killed.

Hindu youth organisations eqipped with ‘Rajput pride’ had earlier organised a march in support of ban on film Padmavat. Ecquipped with same Rajput pride Anukalp Vijay Chandra Chauhan of Sankalp foundation had louded ‘Jai Rajputana and showed strength in the guise of the film.

Similarly, the roll of Baba Shernath temple, near Kasganj railway station, is also dubious. Baba Shernath temple is associated with the tradition of Nath community. Chief minister Yogi Adityanath is the chief patron of Nath Panth and all other temples associated with it. It is on his direction present Mahant Somnath was given the charge of Shernath temple in Kasganj. It was also found out during the fact finding that since the new Mahant came, Maha Arti and other activities were organised by youths of ‘Sankalp’ every Monday on weekly basis. Late Chandan was one of the founder members of Sankalp foundation and he was in close contact with Mahant of Shernath temple near railway station. He played important role in organizing Maha Arti every Monday. Visit the link –  https://www.facebook.com/sankalpfoundationind/posts/417189848699049

Just before the communal violence the image of ex Mahant Ratannath was consecrated in the temple. A procession was taken out in the city on 24 January. Members of Sankalp were there to carry out all this. Visit the link-
https://www.facebook.com/sankalpfoundationind/posts/458355441249156

Chandan also donated 11,000 rupees before he died in dubious circumstances during communal violence. Mahant Somnath has also confirmed it, and along with it a feast and blanket distribution etc. was also done.

A part from this, famous Chamunda temple situated at Thandhi Sadak in Bilram gate is another angle and it was one reason the ABVP and other Hindutva organizations were unhappy with Muslims. There was a dispute between the two communities with regard to erect a gate. The muslims of the area had protested against it. They argued that that would block the way and people of the locality would have to face difficulties. Situation was already tense due to this dispute and ABVP, Sankalp foundation and other Hindutva organizations consciously used this dispute to provoke the people and communal violence of 26 January was conspired.

Police administration did not make serious efforts to control rioters and communal elements were given liberty to openly indulged in loot and arson and shops, houses, vehicles belonging to Muslims were burnt. There was heavy deployment of police force but not only communal elements were accorded protection by the police but member parliament from Etah Rajveer Singh was allowed to add fuel to the fire by his inflammatory speech and more houses and shops belonging to Muslims were looted and set ablaze on third day too. Rihai Manch demanded to book Eta MP Rajveer Singh for inciting violence in Kasganj.

It also came to the fore that police indulged into vandalism in Muslim localities in the name of raids. Police threw utensils and vandalized everything in the houses of Wasim, Javed and their uncle, the accused in Chandan’s murder case. Muslims in Kasganj are terror struck due to police actions like this and nobody is ready to come forward and record his statement.

Muslims in Kasganj told that whoever comes before media and gets his statement recorded or tells anything about the incident is targeted and harassed by the police. Investigation is being affected by the actions of police and impartial investigation is not possible. Rihai Manch demands high level enquiry into the matter as without it justice cannot be done to the victims.