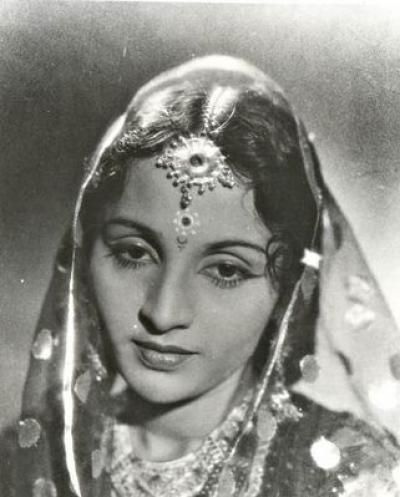 Shobhana Samarth (17 November 1916 – 9 February 2000) was an  film actress, director and producer of Marathi ethnicity, who began her career in the early days of talkie movies in the Hindi film industry, and continued in lead roles into the 1950s. She started in Marathi cinema. Her first Hindi film Nigahen Nafrat, was released in 1935. She is best remembered for her portrayal of Sita in Ram Rajya (1943). In 1997, she was honoured with the Filmfare Special Award for her contribution to arts.Shobhana Samarth later produced and directed a pair of movies that launched the careers of her daughters, Nutan and Tanuja.

Shobhana was born on 17 November 1916 in Bombay,  as Saroj Shilotri. An only child, her father Prabhakar Shilotri was a “pioneer banker” having started the Shilotri Bank in Bombay. Her mother Rattan Bai, in 1936, acted in the film Frontiers of Freedom, in Marathi (Swarajyachya Seemewar). Shobhna studied initially in Cathedral School, Bombay, for one year. In 1928, her father suffered financial losses and the business went into liquidation. The family then shifted to Bangalore in 1931, where Shobhana attended Baldwin Girls High School. To earn a living, her father gave private tuitions, while her mother taught in a Marathi school. In December that year, her father died of a heart attack and the mother and daughter returned to Bombay to stay with her maternal uncle. Shobhana studied in a convent school, but was unable to complete her matriculation as she had joined films by then. Her uncle was opposed to her joining films, and she and her mother moved out of his home (ironically his daughter and Shobhana’s cousin Nalini Jaywant herself became an actress. Shobhana taught privately to make money. She met her future husband Kumarsen Samarth during this time, who had just returned from Germany and was keen on directing films. They got engaged and she started work on her first film.

Shobana’s first film was “Orphans Of Society” (1935), also called Nigahe Nafrat or Vilasi Ishwar for Kolhapur Cinetone, directed by Vinayak and starred Vinayak and Baburao Pendharkar. The film was not a success, but Shobhana was critically acclaimed for her role. The film was bilingual, made in Urdu and Marathi. Shobhana claims in an interview that she did not know any Urdu at that time of filming, speaking the dialogues by rote and it was only later that she picked up the language. She was with Kolhapur Cinetone for thirteen months, but acted in one film.

She left Kolhapur Cinetone and joined Sagar Movietone (Sagar Film Company) and she acted in one film called Kokila (1937), directed by Sarvottam Badami, starring Motilal, Sabita Devi and Sitara Devi. The other film for Sagar was Do Diwane (1936), directed by C. M. Luhar and co-starring Motilal, Yakub and Aruna Devi.

By the end of 1937, Shobhana left Sagar and joined General Films, acting in Industrial India (Nirala Hindustan), directed by Mohan Sinha with Prem Adib and Wasti. The second film for them was Pati Patni (1939) directed by V. M. Gunjal with co-stars Yakub, Sitara Devi and Wasti.

By 1939, she had joined Hindustan Cinetone, making four films with them, which included Kaun Kisi ka (1939), Saubhagya (1940) by C. M. Luhar and Apni Nagariya (1940) by V. M. Gunjal. She then worked in a film directed by her husband, Kumar Sen Samarth, called Ghar Javai (1941), where she was cast with Damuanna Malvankar.

In 1942 came her career-defining film Bharat Milap, directed by Vijay Bhatt and starring Durga Khote as Kaikeyi, Shobhana as Seeta and Prem Adib as Ram. Following this was Ram Rajya in 1943, and Shobhana became identified as Seeta, leading to several other films where they recreated the roles. Shobhana as Sita and Prem Adib as Rama became extremely popular and were accepted by the audiences and had them featuring as Rama and Sita on calendars.

Shobhana was married to director and cinematographer Kumarsen Samarth from Vile Parle (E), Mumbai. They had three daughters, Nutan, Tanuja and Chatura and a son, Jaideep. Eventually, the couple parted amicably and Shobhana became linked to actor Motilal Rajvansh. Two of her daughters, Nutan and Tanuja, also became actresses. Shobhana produced their debut films. Her other daughter Chatura, is an artist and her son Jaideep is an advertising film producer. Chatura and Jaideep never acted in films. Nutan’s son Mohnish Bahl is also an actor, as are Tanuja’s daughters Kajol and Tanishaa Mukerji. Kajol is married to actor Ajay Devgan. Other members of the dynasty include Shomu Mukherjee, who married Tanuja.