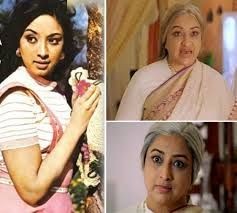 Posted By: Sansar Swapnilon: December 13, 2018In: Filmi SansarNo Comments
Print Email
HAPPY BIRTHDAY-LakshmiNarayan (born Lakshmi Yaragudipati on 13 December 1952) is an film actress known for her works in South Indian film industry and Bollywood. Starting to act at the age of 15, she made her silver screen debut as an actress with the Tamil film Jeevanamsam in 1968, in the same year she was starred in the Kannada film Goadalli CID 999 starring Rajkumar.In 1974, she starred in her First Malayalam movie Chattakari which went on to become blockbuster throughout India.
She then went on to appear in a number of commercially successful films in Telugu,Malayalam, and various other languages.Lakshmi has won the Kerala State Film Award for Best Actress,National Film Award for Best Actress, the Bengal Film Journalists Association Awards, nine Filmfare Awards, three Nandi Awards and various other state awards.
Lakshmi made her Bollywood debut in the year 1975, with the women-centric Julie, the remake of Malayalam film Chattakari. After appearing as a lead actress for more than a decade she switched over to character roles.
Lakshmi was married thrice. Her first marriage was to Bhaskar, who worked with an insurance company. It was arranged by her parents when she was seventeen. Her only biological child, Aishwarya, was born in 1971. Her marriage ended in a divorce, and she gained custody of her daughter, who later became an actress in the 1990s, making her a fourth generation actress. Later She married Mohan Sharma her co-star in Chattakari, Malayalam movie. That also ended up in divorce. She and actor-director K.S. Sivachandran fell in love and got married.
While she was shooting En Uyir Kannamma, she and actor-director Narayan Sivachandran got married. She was long associated with Kannada actor Ananth Nag in the 1980s. Her daughter Aishwarya, gave birth to a baby girl in the mid 1990s, making Lakshmi a grandmother. Lakshmi adopted a baby girl in 2001.Agency
Tags: #LakshmiNarayan
Share 0
Tweet
Share
Share
Share