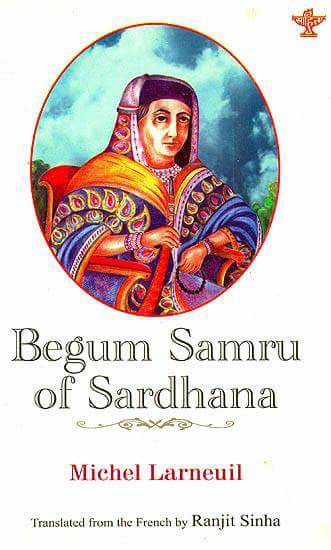 Begum Joanna Nobilis Sombre (ca 1753–1836), popularly known as Begum Samru and also, as Begum Sumru,( Farzana Zeb un-Nissa) started her career as a Nautch (dancing) girl in 18th Century India, and eventually became the ruler of Sardhana, a small principality near Meerut.
She was the head of a professionally trained mercenary army, inherited from her European mercenary husband, Walter Reinhardt Sombre. This mercenary army consisted of Europeans and Indians. She is also regarded as the only Catholic Ruler in India, as she ruled the Principality of Sardhana in 18th and 19th century India.
She died immensely rich. Her inheritance was assessed as approximately 55.5 million gold marks in 1923 and 18 billion deutsch marks in 1953. Her inheritance continues to be disputed to this day. An organisation named “Reinhards Erbengemeinschaft” still strives to resolve the inheritance issue. During her lifetime she had converted to Christianity from Islam.
Begum Samru died at the age of 90 in 1836. Since the Begum was a Muslim before transformation, she was denied to be buried at the Sardhana Church but a monument for her tomb was allowed in her honour. Then her close friend Begum Umdaa who was born in the Jagirdar family of Sardhana and married to Zafte Khan, then Jagirdar of Meerut, gave land for her cremation from her property which is now situated near the NAS College, Meerut.
Her grandson, through her stepson, David Ochterlony Dyce Sombre, died in 1851 at London from where his body was brought to Sardhana and buried beside the Monument of Begum’s Tomb in the imposing church she had built there. It is now known as the Basilica of Our Lady of Graces, and is the centre of two annual pilgrimages in March and November when thousands come to bless the Begum and pray to the Virgin Mary. Begum Samru set an astonishing example of feminism and religious freedom in her own person at a time when there was no public conception of these values. She also inspired large numbers in her kingdom to adopt the Roman Catholic faith which eventually not allowed her dead body to be buried in the Christian cemetery.