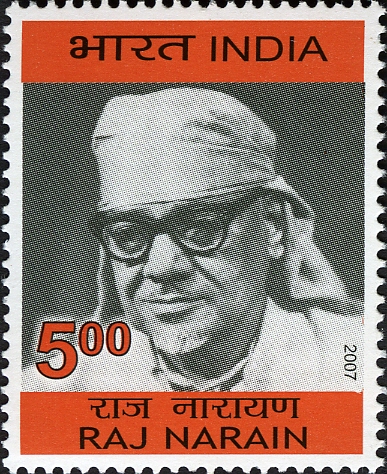 Raj Narain  was an  freedom fighter and politician. He won in a famous electoral malpractice case against the then Prime Minister Indira Gandhi, which led to her disqualification and imposition of Emergency in India in 1975. He defeated Indira Gandhi during the 1977 Lok Sabha elections.

Raj Narain was the son of Anant Prasad Singh and was born on 23 November 1917 in an affluent Bhumihar Brahmin also known as Babhan family in the village Motikoat in Varanasi. He was related to the Narayan dynasty, who were the royal family of the Benares State, and he was directly associated with the family of Maharaja Chet Singh and Maharaja Balwant Singh, who were the Maharajas of Benares State, over a century back. He was educated at Banaras Hindu University, and did M.A. and LL.B.

A Political and Social worker he organized a school for adults, a girls school, a study centre and a labour organization and became member of Congress Socialist Party, in 1934, and National Committee of Students Federation, 1939–44. He was President of the Banaras University Mandal Congress Committee and Member of District Congress Committee .He was president of Student Congress during 1942 Quit India movement, and led protests in and around Varanasi district in UP. Initially he was “underground” for three months and later arrested on 28 September 1942, during Quit India Movement and detained till 1945.

He was imprisoned 58 times for a period totaling about 15 years in connection with students’ and socialist movements. When India became independent, Raj Narain joined Socialist Party led by Acharya Narendra Deva, Jayprakash Narayan and Dr Rammanohar Lohia and held many party positions including Secretary of UP Socialist Party, 1948–51. He was very close to his Guru Acharya Narendra Deva and Dr.Rammanohar Lohia. Dr. Lohia described him as “a person who has the heart of a Lion and practices of Gandhi”. Dr. Lohia admired him a lot and even said that “if in India there could be just three or four persons like him, dictatorship can never shadow the democracy”.

Raj Narain opposed policies and practices of Prime Minister Indira Gandhi and stood (against her) in 1971 Lok Sabha elections from Rai Bareli as an Samyukta Socialist Party Candidate. Although he suffered a defeat from her in 1971 elections, he accused Indira Gandhi of corrupt electoral practices and filed an election petition against her.

The Allahabad High Court on 12 June 1975 upheld the accusations[Note 1] and set aside the election of Indira Gandhi and also disqualified her to contest Lok Sabha election for next 6 years, which led to the imposition of Emergency in India. Nationwide protest started and the streets were flooded with people under the leadership of Loknayak Jai Prakash Narayan and Raj Narain. This was biggest drama of Indian politics after independence, with Raj Narain as one of the main protagonists.

Mrs. Gandhi lifted the state of emergency in January 1977, dissolved Lok Sabha and arranged fresh elections to the body. Narain joined with other opposition parties to form the Janata alliance to face Mrs. Gandhi’s Congress party. Narain once again stood against her from the Rae Bareli constituency. He defeated her with a margin of more than fifty thousand votes. The Janata alliance also swept the election throughout North India to form the majority in the parliament.

Raj Narain reluctantly joined the Morarji Desai government and became Minister of Health and Family Welfare. Narain’s stint as minister lasted just over a year when he and Charan Singh were asked to resign for criticizing the Janata government.

Later on, he demanded that Janata Party members with ties to the Hindu Nationalist, RSS renounce those ties to avoid split loyalties. When this was ignored, he resigned from the party to float a new outfit called Janata Party (Secular). He was able to attract enough defectors from the former socialist and BLD factions to make the Morarji Desai government lose a vote of confidence in the parliament and lose power. Raj Narain’s performance in the 1977-1979 Janata period has been described as that of buffoon, practitioner of Guerilla theater, and as a stalking horse for Charan Singh. Raj Narain had earlier called himself Hanuman to Charan Singh’s Ram. He lost the 1980 Lok Sabha election to Kamlapati Tripathi in Varanasi. Later he fell out with his mentor Charan Singh, and Raj Narain stood against Singh in the Baghpat constituency in 1984. At this time, in his opinion, his Ram turned in to a Ravan and had to be destroyed.Agency