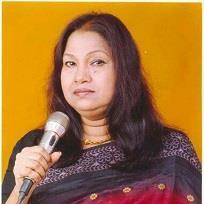 Posted By: Sansar Swapnilon: October 08, 2022In: Film Music SansarNo Comments
Print Email
Usha Timothy’s name is not unfamiliar for ardent hindi film music lovers.It is generally believed that She was discovered by composer duo Kalyanji-Anandji who made her first sing the song “Tu Raat Khadi Thi Chhat Pe” for the movie “Himalay Ki God Mein” in 1964. This is not the truth though. In actuality, even though she was discovered by the duo, it was composer Pt Shivram who gave her the first break. The movie was Producer-Director Adarsh’s 1962 movie Durga Pooja, in which She sang a Sanskrit Shlok of sixty lines!Usha Timothy was only 13 years old at the time. Her duet with Rafi, “Tu Raat Khadi Thi Chhat Pe” was actually her second recorded song which became quite popular in those days.Usha ji was born On October 8, 1949 in a respectable Christian family of Nagpur, where her father used to work for the CBI. Recently, when we met her,Usha ji told us that, “My family always had a strong inclination towards music which is the case even today. My elder brother Madhusudan Timothy is a well known violinist of All India Radio and my cousin brother Vasant Timothy used to teach music at the Khairagarh University in MP. Vasant was a famous violinist in his own right. In such an environment my inclination towards music was but natural. I used to love listening to songs of Rafi sahab and Lata ji from childhood on the radio, singing along, although I had not yet begun my formal music training”.