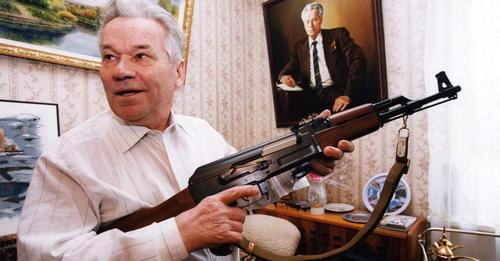 Mikhail Timofeyevich Kalashnikov  was a Russian designer who is known for designing the AK-47, AKM, and AK-74 assault rifles when he served in the Soviet Army during World War II. He had the rank of lieutenant general.

Mikhail Timofeyevich Kalashnikov  was born on 10 November 1919 in Kuriya, Altai Krai, Russian SFSR. He served in World War II and created many weapons and bombs including the AK-47 and a submachine gun. He was married to Ekaterina Kalashnikova. They had three children, one of them was gun designer Victor Kalashnikov. He lived in Izhevsk, Udmurtia.

Mikhail  Kalashnikov was, according to himself, a self-taught tinkerer who combined innate mechanical skills with the study of weaponry to design arms that achieved battlefield ubiquity. Even though Kalashnikov felt sorrow at the weapons’ uncontrolled distribution, he took pride in his inventions and in their reputation for reliability, emphasizing that his rifle is “a weapon of defense” and “not a weapon for offense”.

On 17 November 2013, Kalashnikov was hospitalized in an Udmurtian medical hospital for gastric hemorrhage. He died on the morning of 23 December, 2013 from the illness, aged 94.Agency