BREAKING NEWS
Home On This Day The Congress 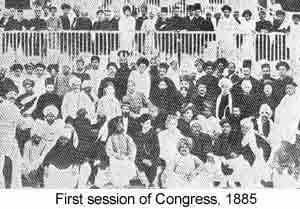 Posted By: Swapnil Sansaron: December 28, 2022In: On This DayNo Comments
Print Email

Foundation day-The Congress was founded by Indian and British members of the Theosophical Society movement, most notably A.O. Hume.It has been suggested that the idea was originally conceived in a private meeting of seventeen men after a Theosophical Convention held at Madras in December 1884. Hume took the initiative, and it was in March 1885 that the first notice was issued convening the first Indian National Union to meet at Poona the following December.
Founded in 1885 claiming that it had the objective of obtaining a greater share in government for educated Indians, the Indian National Congress was initially not opposed to British rule. The Congress met once a year during December. Indeed, it was a Scotsman, Allan Octavian Hume, who brought about its first meeting in Bombay, with the approval of Lord Dufferin, the then-Viceroy. Womesh Chandra Bonnerjee was the first President of the INC. The first meeting was scheduled to be held in Pune, but due to a plague outbreak there, the meeting was later shifted to Bombay. The first session of the INC was held from 28–31 December 1885, and was attended by 72 delegates.The Indian National Congress is one of the two major political parties in India, the other being the Bharatiya Janata Party.It is the largest and one of the oldest democratically-operating political parties in the world.The party’s modern liberal platform is largely considered centre-left wing in the Indian political spectrum as contrasted to the right-wing socio-religious ultra-nationalist-based Bharatiya Janata Party. Founded in 1885 by members of the occultist movement Theosophical Society Allan Octavian Hume, Dadabhai Naoroji, Dinshaw Wacha, Womesh Chandra Bonnerjee, Surendranath Banerjee, Monomohun Ghose, Mahadev Govind Ranade and William Wedderburn—the Indian National Congress became the leader of the Indian Independence Movement, with over 15 million members and over 70 million participants in its struggle against British rule in India. After independence in 1947, it became the nation’s dominant political party, led by the Nehru-Gandhi family for the most part; major challenges for party leadership have only recently formed.
In the 2009 general elections, the Congress emerged as the single largest party in the Lok Sabha, with 206 of its candidates getting elected to the 543-member house. Consequently it, along with a coalition of allies called the United Progressive Alliance (UPA), was able to gain a majority and form the government.

As of 2014, the election symbol of the Congress, as approved by the Election Commission of India, is an image of a right hand with its palm facing front and its fingers pressed together;this is usually shown in the centre of a tricolor flag. The hand symbol was first used by Indira Gandhi when she split from the Congress (R) faction following the 1977 elections and created the New Congress (I).

The symbol of the original Congress during elections held between 1952 and 1971 was an image of two bullocks with a plough. The symbol of Indira’s Congress (R) during the period 1971–77 was a cow with a suckling calf.Agency