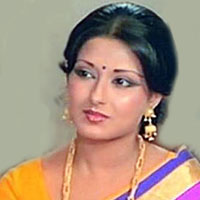 Agency,Mumbai.Moushumi Chatterjee ( 26 April 1948 As a Indira Chatterjee ) is a Bollywood actress, who has also acted in Bengali cinema. Her on-screen pairings with actors like Rajesh Khanna, Shashi Kapoor, Jeetendra, Sanjeev Kumar and Vinod Mehra were popular. She was the third highest paid Hindi actress in 1973-1978.Moushumi Chatterjee was born in Calcutta. Her father Prantosh Chattopadhyaya was in the Army and her grandfather was a judge. She had a sister and a brother.She is married to Jayant Mukherjee (son of Hemanta Kumar Mukhopadhyay). They have two daughters, Payal and Megha.She started to act in Bollywood movies after her marriage, which was quite unusual for women during that time.Moushumi Chatterjee made her film debut in the Bengali hit Balika Badhu (1967) directed by Tarun Majumdar at the age of 15. In an interview Moushumi Chatterjee quoted, “After Balika Badhu, I was flooded with Bengali movies but I wished to complete my studies. However, movies were in my fate hence when I was studying in class X, a close aunt of mine was on her death bed and her last wish was to see me married. Hence, to satisfy her wish I got married.Her debut as heroine in the Hindi film Anuraag in 1972 was directed by Shakti Samanta. The film became very successful. She played a blind girl who falls in love, and her performance earned her a Filmfare nomination as Best Actress. Anuraag won the Filmfare Award as Best Picture. About her Hindi film debut, she said in an interview “As my father-in-law was a renowned film celebrity many film personalities used to throng our house. One among them was filmmaker Shakti Samanta who insisted upon me to act in movies. I declined but both my father-in-law and my husband encouraged me thus I got Anuraag.”When asked about her first role in Hindi films she said that “[w]hen Shaktida told me that I have to play a blind lady I was taken aback. I honestly told Shaktida that I may not do justice to the role as I have never studied a blind person but Shaktida assured me that he will take me to a blind school and train me … he insisted to do a small Mahurat shot before. […] After the shot Shaktida told me that I had given the shot so skillfully that there was no need to visit a blind school!”
In 1973 she played in several films including Naina opposite Shashi Kapoor, Kuchhe Dhaage with Vinod Khanna, and Us Paar with Vinod Mehra. In 1974, she acted with the then-struggling Amitabh Bachchan in the thriller Benaam and opposite Rajesh Khanna in the suspense drama Humshakal. Her most successful film came at the end of 1974, where she played a rape survivor in Manoj Kumar’s Roti Kapada Aur Makaan.Her rape sequence is considered one of the most disturbing scenes in Hindi cinema Her performance earned her a Filmfare Nomination as Best Supporting Actress. Her other most successful films were ‘Swarg Narak’ with Jeetendra and ‘Anand Ashram’ with Rakesh Roshan. She also did justice to her role in Sanjeev Kumar starrer ‘Angoor’.She was paired romantically with actor Vinod Mehra in 10 films, and the pair worked together in 13 films, including Anuraag, Us-Paar, Raftaar, Umar Qaid, Mazaaq, Zindagi, and Jyoti Bane Jwala. She did Basu Chatterjee’s film Manzil (1979). Her Bengali film with Uttam Kumar, Ogu Bodhu Sundari, released in 1981 became successful. In 1982, she did Marathi film (cameo role for song “Tumhi Adkitta Mi Ho Supari”) Bhannat Bhanu. In addition to Vinod Mehra, she played with lead actors including Shashi Kapoor, Rajesh Khanna, Jeetendra and Sanjeev Kumar. Her successful films with Rajesh Khanna included Bhola Bhala, Prem Bandhan, and Ghar Parivaar. In 1984, she worked as the lead heroine in three films: Maang Baro Sajna, Ghar Ek Mandir, and Pet Pyaar Aur Paap. In 1985, she played in the Bengali film Pratigna. After 1985, she did not get lead roles regularly in Hindi films.From 1985 to 1991, Chatterjee got more offers as a character actress and she made the transition thus to roles of mother and bhabhi (sister-in-law) often pairing with Dharmendra or Sunil Dutt. She played Sunny Deol’s sister-in-law in Ghayal. Occasionally, she got lead roles in films in the 1990s with Ghar Parivaar and Aa Ab Laut Chalen, both opposite Rajesh Khanna, then Santaan, Prateeksha (1993) and Udhaar Ki Zindagi with Jeetendra. Some of her films as supporting actress since 1995 include Keemat: They Are Back (1998), Aa Ab Laut Chalen (1999), Na Tum Jaano Na Hum, Hum Kaun Hai? (2004).In 2006, Moushumi Chatterjee made a comeback to cinema, with Tanuja Chandra’s Zindaggi Rocks. She did the Indo-Canadian production Bollywood/Hollywood in 2003.Her Bengali films as the lead heroine include Balika Badhu (1969), Parineeta (1969), Anindita (1972), Anand Ashram (1977), Ogu Bodhu Sundari (1981), Prarthana (1984), Shatarupa (1989), Kari Diye Kinlam (1989), Bidhilipi (1991) and later as supporting actress were Nater Guru (2003), Bhalobasar Anek Naam (2005), Golapi Ekhon Bilatey (2006), The Japanese Wife (2010) and Goynar Baksho (2013). She sang a song titled “Tomar Duare” in the film Mallick Bari (2009).
Moushumi accepted a dual role in Tanuja Chandra’s Zindaggi Rocks (2006) and crossed over to Canada to act in Bollywood/Hollywood (2003). She entered politics in 2004.In 2015 Moushumi Chatterjee will return to Bollywood after a gap of nine years with Shoojit Sircar’s family comedy-drama “Piku.