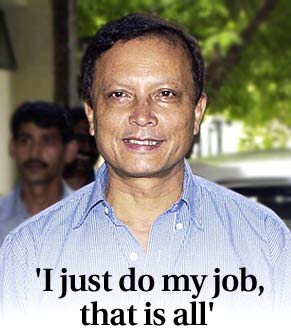 Swapnil Sansar: James Michael Lyngdoh (08-02-1939 is an civil servant and was Chief Election Commissioner of India from June 14, 2001 to February 7, 2004. He was awarded the Ramon Magsaysay Award for Government Service in 2003.
Of Khasi origin, Lyngdoh hails from the northeastern state of Meghalaya. He did his schooling from St. Edmund’s School, Shillong. Lyngdoh is the son of a district judge.Lyngdoh completed his education in Delhi, at St Stephen’s College.
Lyngdoh entered the IAS, when he was twenty-two. He quickly became known for probity and toughness and for favoring the underdog against politicians and the local rich. In one early post, his principled execution of mandated land reforms so enraged landlords that he was transferred before the year was out. Similar clashes with the powers-that-be marked his rise in the Service, But rise he did, eventually serving as Secretary, Coordination and Public Grievances, Cabinet Secretariat, Government of India.

In 1997, the president named Lyngdoh one of India’s three election commissioners. By 2001 he was chief election officer. Lyngdoh soon faced crises in two of India’s most troubled states.
In July 2002, S S Bhandari, Governor of Gujarat on the recommendation of State Cabinet headed by Chief Minister Narendra Modi, dissolved the Gujarat Assembly nine months before its term was due to end. The decision, attacked by main Opposition Congress and Left parties, was seen as an attempt to force the Election Commission to hold early elections in view of the Constitutional mandate prohibiting a more than six-month gap between two sessions of the House.The dissolution of the assembly had been publicly opposed by the Election Commission in wake of the then recent communal violence in the state. The Election Commission headed by Lyngdoh, however, ruled out early elections in Gujarat. On August 20, 2002, in a public meeting at Bodeli, near Vadodara, Narendra Modi targeted Chief Election Commissioner JM Lyngdoh. Modi insinuated that the reason the Election Commission had delayed holding the Gujarat assembly elections was because Lyngdoh was a Christian. Narendra modi used to quote his full name James Michael Lyngdoh in press conferences,public meetings etc to highlight his religious background. Lyngdoh had hit back at Narendra Modi for attacking him on religious grounds saying it was “quite despicable” and “gossip of menials” by those who have not heard of atheism. A day after Prime Minister Vajapayee’s rebuke, Modi claimed that the controversy with Lyngdoh was over following Vajpayee’s “guidelines” but reiterated his demand for early assembly elections in Gujarat.In October 2002, the Indian Supreme Court upheld the Election Commission’s order to defer assembly elections in Gujarat.
In 2004, Lyngdoh publishsed a book titled “Chronicles of an Impossible Election”. In this book he has dealt with the electoral process in India and the role of Election Commission. It is a chronicle of the assembly elections held in Jammu and Kashmir in the year 2002. It also discusses the Gujarat elections of 2002. The book received widespread acclaim and praise.
Lyngdoh has frequently expressed his disdain for politics and politicians. In February 2004, in an interview, Lyngdoh had said: “Politicians by appointment only, all others are welcome to my house.”.In August 2002, Lyngdoh had said that ““I think the politics today is dirty, vitiated and tendentious.” Lyngdoh has also described politicians as a “cancer” which has no cure.
He remains active in public life after retirement. He is one of the members of India Rejuvenation Initiative an Indian anti-corruption organization formed by a group of retired and serving bureaucrats.
In February 2011, Lyngdoh, while speaking to journalists after chairing a session on ‘Free & Fair Elections – The Soul of Democracy’, said that state funding of elections is ‘useless’ and that a proportionate representation system where the electoral fight takes place between parties and not candidates would be more appropriate since it would involve significantly less expenditure. In June 2012, Lyngdoh, while addressing a round table on “Indian Democracy & Elections – What is to be done?”, said that a proportional representation system for at least 50 percent of the seats of the legislatures would reduce electoral malpractices. He explained that political parties would reduce the need to spend huge amounts of funds on elections of individuals if the switch to proportional representation is made. He opined that the Election Commission should take charge of even the internal elections of political parties since in his opinion that is the only way to ensure democracy.⁠⁠⁠⁠