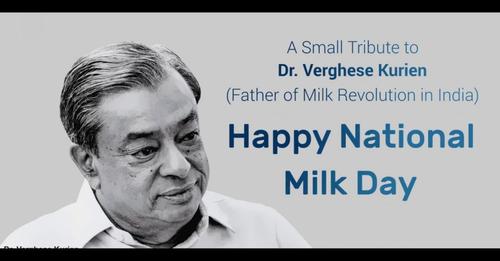 Posted By: Sansar Swapnilon: November 26, 2022In: On This DayNo Comments
Print Email

On 26 November, National Milk Day is observed throughout India in honour of Dr. Verghese Kurien, the man credited with spearheading the white revolution. He was a key player in ‘Operation Flood’, which boosted India’s dairy industry towards the status of the country’s largest self-sustaining industry. National Milk Day has been observed in India since 2014 under the initiative taken by the Indian Dairy Association.

He was born in Kozhikode, Kerala, on 26 November 1921, to a wealthy Syrian Christian family. Due to his leadership of Operation Flood, the largest agricultural programme in the world, Dr. Kurien is known as the “Father of the White Revolution” in India.

In order to fix the prices charged, he helped organise the Delhi Milk Scheme and formed 30 organisations, all that was managed by farmers and employees. He is credited with industrialising dairy production and founding the Amul brand. Due to Dr. Kurien’s work, India surpassed the US to become the world’s largest milk production in 1998.

Operation Flood, which was started in 1970, has assisted dairy farmers in managing their own development and taking ownership of the resources they produce. A National Milk Grid connects customers in more than 700 towns and cities with milk farmers across India, minimising seasonal and regional price differences while ensuring that the producer consistently receives fair market rates in a transparent manner.

Village milk producers’ cooperatives, that purchase milk, offer inputs and services, and give members access to contemporary management and technology, have formed the foundation of Operation Flood.Agency