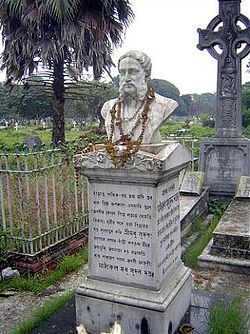 Michael Madhusudan Dutt,(25 January 1824) was a popular 19th-century Bengali poet and dramatist. He was a pioneer of Bengali drama. His famous work Meghnad Bodh Kavya, is a tragic epic. It consists of nine cantos and is exceptional in Bengali literature both in terms of style and content. He also wrote poems about the sorrows and afflictions of love as spoken by women.

Dutta is widely considered to be one of the greatest poets in Bengali literature and the father of the Bengali sonnet. He pioneered what came to be called Amitrakshar chhanda (blank verse). Although his first love remained poetry, Dutt showed prodigious skill as a playwright. He was the first to write Bengali plays in the English style, segregating the play into acts and scenes. He was also the pioneer of the first satirical plays in Bengali – Buro Shaliker Ghare Rnow.
He was born in Sagordari, a village in Keshabpur Upazila, Jessore District of Undivided Bengal (now Bangladesh). His father was Rajnarayan Dutt, a pleader in the Sudder court, and his mother was Jahnabi Devi. His childhood education started in a village named Shekpura, at an old mosque, where he went to learn Persian. He was an exceptionally talented student. Since his childhood, Dutt was recognised by his teachers and professors as being a precocious child with a gift of literary expression. He was very imaginative. Early exposure to English education and European literature at home and in Kolkata inspired him to emulate the English in taste, manners and intellect. An early influence was his teacher at Hindu College, Calcutta, David Lester Richardson. Richardson was a poet and inspired in Dutt a love of English poetry, particularly Byron.

Dutt began writing English poetry aged around 17 years, sending his works to publications in England, including Blackwood’s Magazine and Bentley’s Miscellany. They were, however, never published.It was also the time he began correspondence with his friend, Gour Das Bysack, which today form the bulk of the source on his life.

As a young student, Dutt was influenced by the thoughts and actions of the Young Bengal – a movement by a group of illustrious former students of the Hindu College (now Presidency College) in Calcutta (now Kolkata) against the atrocities, blind beliefs and customs they held as illogical, prevalent in the Hindu society of 19th century Bengal. Dutta, a student of Hindu College himself, aspired to be an English poet and longed to travel to England to gain fame. When his father, concerned by these trends, arranged his marriage, he rebelled. One aspect of his rebellion involved conversion to Christianity.

Madhusudan embraced Christianity at the Old Mission Church in spite of the objections of his parents and relatives on 9 February 1843. He did not take the name Michael until his marriage in 1848.

He had to leave Hindu College on account of being a convert. In 1844, he resumed his education at Bishop’s College, where he stayed for three years.

In 1847, he moved to Madras (Chennai) due to severe family tensions and economic hardship, having been disinherited by his father. While in Madras, he stayed in the Black Town neighbourhood, and began working as an “usher” at the Madras Male Orphan Asylum. Four years later, in 1851, he became a Second Tutor in the Madras University High School. In addition, he edited and assisted in editing the periodicals, Madras Circulator and General Chronicle, Athenaeum, Spectator and Hindoo Chronicle.

Dutt was greatly influenced by the works of William Wordsworth and John Milton. Dutt was a spirited bohemian and Romantic.

During his stay in Madras, he published such works as King Porus, The Captive Ladie (1849) – centered around King Prithviraj’s elopement with the princess of Kannuaj- and Visions of the Past. The Hurkaru, a prominent periodical at the time gave the self-published The Captive Ladie unfavaorable reviews, and was in Madhusudan’s own words, “was somewhat severe”. John Elliot Drinkwater Bethune, the then President of the Council of Education, was full of praise for the octosyllabic in his letter to Bysack, and advised Dutt to “employ the taste and talents, which he has cultivated by the study of English, in improving the standard, and adding to the stock of the poetry of his own language.”

The period during which he worked as a head clerk and later as the Chief Interpreter in the court, marked his transition to writing in his native Bengali, following the advice of Bethune and Bysack. He wrote 5 plays: Sermista (1859), Padmavati (1859), Ekei Ki Boley Sabyata (1860), Krishna Kumari (1860) and Buro Shaliker Ghare Ron (1860). Then followed the narrative poems: Tilottama Sambhava Kavya (1861), Meghnad Badh Kavya (1861), Brajagana Kavya (1861) and Veerangana Kavya (1861). He also translated three plays from Bangla to English, including his own Sermista.

Meghnad Badh Kavya, The Slaying of Meghnad, the story of the final fight and demise of Meghnad, the eldest son of Ravana, is unanimously hailed as his magnum opus, although his journey to publication and recognition was far from smooth. However, with its publication, he distinguished himself as a serious composer of an entirely new genre of heroic poetry, that was Homeric and Dantesque in technique and style, and yet so fundamentally native in theme. To cite the poet himself: “I awoke one morning and found myself famous.” Nevertheless, it took a few years for this epic to win recognition all over the country.

A volume of his Bangla sonnets was published in 1866. His final play, Maya Kannan, was written in 1872. The Slaying of Hector, his prose version of the Iliad remains incomplete.

Madhusudan was a gifted linguist and polyglot. He studied Hebrew, Latin, Greek, Tamil, Telugu, and Sanskrit.

His family joined him in 1863, and thereafter they shifted to the much cheaper Versailles, due to the miserable state of their finances. Funds were not arriving from India according to his plans. He was only able to relocate to England in 1865 and study for the bar due to the munificent generosity of Ishwar Chandra Vidyasagar. For this, Dutt was to regard Vidyasagar as Dayar Sagar (meaning the ocean of kindness) for as long as he lived. He was admitted to the High Court in Calcutta on his return in February 1867. His family followed him in 1869.

His stay in England had left him disillusioned with European culture. He wrote to his friend Bysack from France:

If there be any one among us anxious to leave a name behind him, and not pass away into oblivion like a brute, let him devote himself to his mother-tongue. That is his legitimate sphere his proper element.
Dutt had refused to enter into an arranged marriage which his father had decided for him. He had no respect for that tradition and wanted to break free from the confines of caste-based endogamous marriage. His knowledge of the European tradition convinced him of the superiority of marriages made by mutual consent (or love marriages).

He was the first Indian to marry a European or Anglo-Indian woman. While in Madras he married Indo-Scottish-Britton, Rebecca Thompson McTavish,a 17-year-old resident of the Madras Female Orphan Asylum, on 31 July 1848. Dutt assumed the name Michael when the marriage was registered in the baptismal register. They had four children together. He wrote to Bysack in December 1855:

Dutt returned from Madras to Calcutta in February 1856, after his father’s death (in 1855), abandoning his wife and four children in Madras. No records of his divorce from Rebecca or remarriage have been found. In 1858, he was joined there by a 22 year old of French extraction, Emelia Henrietta Sophie White, the daughter of his colleague at the Madras Male Orphan Asylum.They had two sons, Frederick Michael Milton (23 July 1861 – 11 June 1875) and Albert Napoleon (1869 – 22 August 1909), and a daughter, Henrietta Elizabeth Sermista (1859 – 15 February 1879). A fourth child was stillborn.[4] Their relationship lasted until the end of his life, Henrietta pre-deceasing him by three days, on 26 June 1873.

Rebecca died in Madras in July 1892. Only a daughter and a son survived her. The son, McTavish-Dutt, parctised as a pleader in the Court of Small Causes in Madras.

The tennis player Leander Paes is a direct descendant of his- Dutt is his great great grandfather on his mother’s side.

Madhusudan died in Calcutta General Hospital on 29 June 1873. Just three days prior to his death, Madhusudan recited a passage from Shakespeare’s Macbeth to his dear friend Bysack, to express his deepest conviction of life:Agency