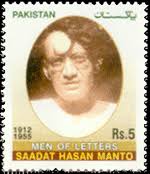 Saadat Hassan Manto 11 May 1912 Samrala – 18 January 1955 Lahore was a British Indian-born Pakistani short story writer of the Urdu language. He is best known for his short stories, “Bu” , “Khol Do” , “Thanda Gosht” , and “Toba Tek Singh”.Manto was also a film and radio scriptwriter and a journalist. He published twenty-two collections of short stories, one novel, five collections of radio plays, three collections of essays, and two collections of personal sketches.
Manto was tried for obscenity six times, thrice before 1947 and thrice after 1947 in Pakistan, but never convicted.Some of his works have been translated in other languages.Manto lived in Laxmi Mansions, The Mall, Lahore for seven difficult years. In Lahore he wrote some of his most praised works, including Thanda Gosht, Khol Do, Toba Tek Singh, Iss Manjdhar Mein, Mozalle, and Babu Gopi Nath.
The substandard alcohol that he consumed destroyed his liver and in the winter of 1955 he fell victim to liver cirrhosis. He was 42 years old at the time of his death. He was survived by his wife Safiyah and three daughters. January 18, 2005, the fiftieth anniversary of his death, Manto was commemorated on a Pakistani postage stamp.