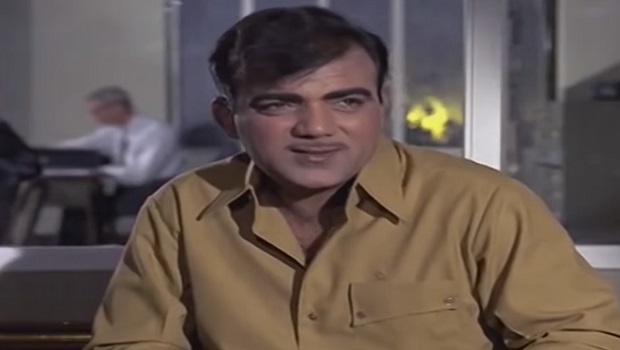 Mehmood Ali Khan 29 September 1932 – 23 July 2004), popularly known siply as Mehmood (BHAI JAAN ), was a actor, director and producer best known for playing comic roles in Hindi films. During his career of more than four decades, he worked in over 300 Hindi films.Mehmood was one of eight children born to actor and dancer Mumtaz Ali in Bombay. Mehmood had an elder sister and six younger siblings. His sister, Minoo Mumtaz, was also a successful dancer and character actress in Bollywood movies. He started acting reluctantly as a child in Bombay talkie films like Kismet. Some of his early jobs before he concentrated only on acting were driving, doing odd jobs, and selling poultry. He worked as driver of director P. L. Santoshi. Later, Santoshi’s son Rajkumar Santoshi cast Mehmood in his venture Andaz Apna Apna. He was hired to teach table tennis to Meena Kumari in those days. He later married her sister Madhu. After getting married and becoming a father, he decided to act to earn a better living. He got a small break as a murder victim in the film C.I.D.. He started off by doing small unnoticed roles in films like Do Bigha Zameen and Pyaasa. He later went on to act in lead roles, but he was appreciated for his comedy, some of which was in the Hyderabad region Urdu accent.His first break as both a director and an actor was Bhoot Bangla with actress Tanuja.The movie paved the way for Mehmood to succeed Johnny Walker as the most successful Bollywood comedian.He followed his successes with superhit comic roles in films like Padosan (As a Tamil Brahmin Music Teacher- one of his greatest roles),Love in Tokyo,Aankhen,Bombay to Goa and Pyaar Kiye Jaa. He also became a sterling director of Hindi films,Kunwara Baap being a prime example.Mehmood was riding on his success from 1965 to 1985 when he was considered one of the more successful movie artists. Amitabh Bachchan was a tenant for 11 Months at the Mehmood Outhouse from 1967–1968 and again from 1972-1973 (4 Months).Mehmood acted and directed Bombay to Goa in which Amitabh was a lead actor.However, after 1985, Mehmood began to decline because of the new trend in which lead actors were given a substantial amount of roles in which comedy was part of it. Other character actors like Anupam Kher,Jagdeep, and Johnny Lever were also successful.Mehmood like all other contemporaries had not made wise investments and his financial prosperity began to decline. He made a handful of movies from 1989 to 1999 but most of them were either shelved or made no impression. He acted as Johny in Rajkumar Santoshi’s Andaz Apna Apna; that was his last hit film as an actor.He died in his sleep on 23 July 2004 in Pennsylvania,US, where he had gone for treatment of heart disease after suffering poor health for several years. His fans were able to pay homage to him at Mehboob Studio in Bandra, Mumbai, India.
Mehmood’s son Lucky Ali is a singer and composer who has also acted in films.Chote Nawab (1961) Sasuraal (1961) Pyase Panchi (1961) Dil Tera Diwana (1962) Zindagi, Shabnam,Chitralekha (1964)Gumnaam,Johar Mehmood in Goa,Namasteji ,Kahin Pyar Na Ho jaye,Bhoot Bangla (1965)Pyar Kiye Ja ,Love in Tokyo,Pati Patni (1966)Patthar ke Sanam (1967)Sangharsh ,Padosan,Aankhen Neel Kamal Do Phool Do Kaliyan Sadhu aur Shaitan (1968)Humjoli (1970)Main Sunder Hoon Mere Apne Johar Mehood in Hong Kong (1971) Bombay to Goa (1972) Kunwaara Baap Do PhoolPocketmaar (1974) Salaakhen (1975) Ginny Aur Johnny  Jai Bajrang Bali Sabse Bada Rupaiya (1976) Aafat (1977) Des Pardes 1 Baap 6 Bete (1978)  Khanjar (1980)  Andaz Apna Apna (1994)Guddu (1995)Dushman Duniya Ka (1996).Filmfare Best Supporting Actor Award – Won 1963 Dil Tera Diwana Filmfare Best Comedian Award – Won 1967 Pyar Kiye Jaa 1970 Waris 1972 Paras 1975 Vardaan Filmfare Best Comedian Award – Nominated 1967 Love in Tokyo 1968 Mehrban 1969 Neel Kamal1969 Sadhu Aur Shaitaan  1970 Meri Bhabhi 1971 Humjoli 1972 Main Sunder Hoon 1973 Bombay to Goa 1974 Do Phool 1975 Duniya Ka Mela1975 Kunwara Baap 1976 Qaid 1977 Sabse Bada Rupaiya 1980 Nauker 1983 Khud-Daar