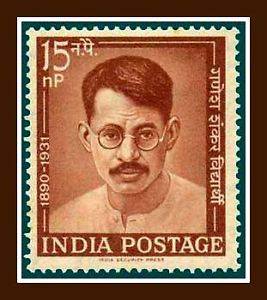 Ganesh Shankar Vidyarthi, was an journalist, a leader of the Indian National Congress and an independence movement activist. He is mostly known as the founder-editor of the Hindi language newspaper, Pratap.
His short life was a constant struggle against oppression and inhumanity. He described himself in these words: “I am a fighter against oppression and injustice, whether practised by bureaucrats, zamindars, capitalists or those of high caste. I have fought all my life against oppression against inhumanity and may God give me strength to fight on till the last.”.
Ganesh Shankar was born at Hathgaon/Hathgam. 26 October 1890 .This is also the birthplace of renowned Urdu poet Shri Iqbal Verma and it is said, this was populated by Saint Parashar. His father Shri Jai Narain was a teacher in a middle school in Madhya Pradesh. He was poor but deeply religious and dedicated to high ideals. It was under him that Ganesh Shankar received his early schooling and passed the High School examination privately in 1907. He could not study further due to poverty and became a clerk in the currency office and later a teacher in high school in Kanpur.
His real interest, however, was in journalism and public life and he came early under the influence of the nationalist upsurge, which was taking place in the country. He became an agent of the well-known revolutionary Hindi and Urdu journals – Karamyogi and Swarajya and also began to contribute to them. He adopted the pen-name ‘Vidyarthi’ – the seeker of knowledge. He attracted the notice of Pt. Mahabir Prasad Dwiwedi, the doyen of Hindi journalism who offered him the job of a sub-editor in his famous literary monthly, “The Saraswati”, in 1911. Ganesh Shankar, however, was more interested in current affairs and politics and therefore joined the Hindi weekly “Abhyudaya” a political journal of the time. He thus served his apprenticeship under two of the greatest figures in Hindi literature and journalism of the time.
In 1913 Ganesh Shankar came back to Kanpur and launched his career of a crusading journalist and freedom fighter, which was only to end with his death 18 years later. He founded ‘Pratap’, his famous revolutionary weekly, which identified itself with the cause of the oppressed wherever they might be. It was through this paper that he waged his famous fights for the oppressed peasants of Rae Bareli, the workers of the Kanpur mills and the downtrodden people of Indian states. During the course of these fights he had to face numerous prosecutions, pay heavy fines and suffer five prison sentences. He first met Gandhiji in 1916 in Lucknow and threw himself whole-heartedly in the national movement. He took a leading part in the Home Rule Movement of 1917–18 and led the first strike of textile workers in Kanpur. In 1920 he launched the daily edition of Pratap and it was in this year that he was sentenced to two years rigorous imprisonment for championing the cause of peasants of Rae Bareli. He was released in 1922 and almost immediately sent to jail again, for delivering a “seditious” speech as the President of the Provincial Political Conference at Fatehgarh. He was released in 1924, greatly shattered in health, but he knew no respite and immediately launched himself in the preparation for the Congress Session at Kanpur in 1925.
In 1925, when the Congress decided to contest elections of Provincial Legislative Councils and organised the Swaraj Party, Ganesh Shankar won a resounding victory on its behalf, from Kanpur and served as a Member of the U.P. Legislative Council till 1929 when he resigned at the behest of the Congress. In 1929 he was elected the President of the U.P. Congress Committee and was appointed the first ‘dictator’ to lead the Satyagrah movement in U.P. In 1930, and was arrested and sent to jail again. He was released on 9 March 1931 under the Gandhi-Irwin Pact.
While he was about to proceed to Karachi to attend the Congress Session, Kanpur fell into an orgy of communal rioting. Ganesh Shankar Vidyarthi threw himself in the midst of furious mobs and saved the lives of thousands of innocent persons belonging to both the Hindu and Muslim communities. It was on this mission of mercy that he was butchered to death by a mob. (– 25 March 1931, Kanpur)
Mahatma Gandhi paid him the following tribute in the pages of ‘Young India’. “The death of Ganesh Shankar Vidyarthi was one to be envied by us all. His blood is the cement that will ultimately bind the two communities. No pact will bind our hearts. But heroism such as Ganesh Shankar Vidyarthi showed is bound in the end to melt the stoniest hearts, melt them into one. The poison has however gone so deep that the blood even of a man so great, so self-sacrificing and so utterly brave as Ganesh Shankar Vidyarthi may today not be enough to wash us of it. Let this noble example stimulate us all to similar effort should the occasion arise again.”