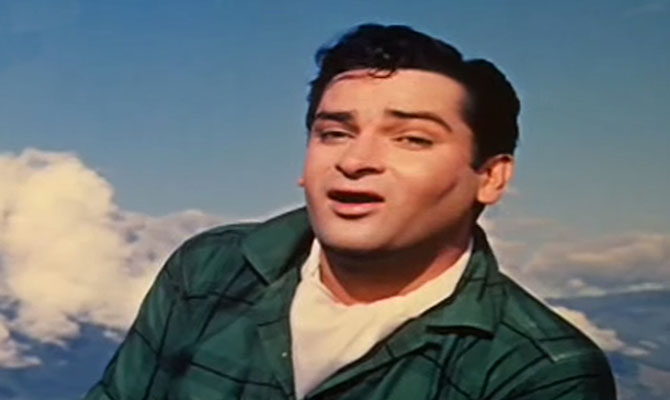 Shammi Kapoor born Shamsher Raj Prithviraj Kapooron on  21 October 1931 was an film actor and director. He was a prominent lead actor in Hindi cinema from the late 1950s until the early 1970s and played supportng roles from 1974 to 2011. He is also worked in serial CHATAAN ( later closed ) which was telecast in Sony channel.Shammi Kapoor is hailed as one of the most entertaining lead actors that Hindi cinema has ever produced, his notable films include Tumsa Nahin Dekha, Dil Deke Dekho, Junglee, Dil Tera Diwana, Professor, China Town, Rajkumar, Kashmir Ki Kali, Janwar, Teesri Manzil, An Evening in Paris, Bramhachari, Andaz and Vidhaata. He received the Filmfare Best Actor Award in 1968 for his performance in Brahmachari and Filmfare Award for Best Supporting Actor for Vidhaata in 1982. He was given the name Shamsher Raj Kapoor at his birth in Mumbai to film and theatre actor Prithviraj Kapoor and Ramsharni Kapoor née Mehra. Shammi was the second of the three sons born to Prithviraj (the other two being Raj Kapoor and Shashi Kapoor), both successful Bollywood actors. Though born in Mumbai, he spent a major portion of his childhood in Kolkata, where his father was involved with New Theatres Studios, acting in films. It was in Kolkata that he did his Montessori and Kindergarten. After coming back to Mumbai, he first went to St. Joseph’s Convent (Wadala) and then, to Don Bosco School. He finished his matric schooling from New Era School at Hughes Road.Kapoor had a short stint at Ruia College, in Matunga, Mumbai, after which he joined his father’s theatrical company Prithvi Theatres. He entered the cinema world in 1948, as a junior artiste, at a salary of Rs. 50 per month, stayed with Prithvi Theatres for the next four years and collected his last pay check of Rs. 300, in 1952. He made his debut in Bollywood in the year 1953, when the film Jeevan Jyoti was released. It was directed by Mahesh Kaul and Chand Usmani was Kapoor’s first heroine.Kapoor started out with serious roles but with Filmistan’s Nasir Hussain directed Tumsa Nahin Dekha (1957) opposite Ameeta and Dil Deke Dekho (1959) with Asha Parekh, he attained the image of a light-hearted, and stylish playboy. Tall, athletic, lively, fair complexioned, green-eyed and with handsome features, Shammi was a heartthrob, and his good looks and physique complemented his image. Both the films were debut films of the respective actresses Ameeta and Asha Parekh and both went on to be big hits and are regarded as classics.With Junglee (1961) his new image was cemented and his subsequent films were all in this genre. He particularly chose Mohammed Rafi as his playback voice. In his early career in fifties, he had often played second fiddle to established heroines like Madhubala in films such as Rail Ka Dibba (1953) and Naqab, with Nutan in Laila Majnu, with Shyama in Thokar and with Nalini Jaywant in Hum Sab Chor Hain though none of them except Thokar clicked at the box office. But producers after 1960 apart from the actresses from southern India, loved pairing Shammi with new heroines, three of them became huge stars in their own right in Hindi films: Asha Parekh, Saira Banu, and Sharmila Tagore Of all his heroines, he said that Sharmila Tagore, Rajshree, and Asha Parekh were easy to work with. Sharmila Tagore and Saira Banu made their Bollywood debuts with Shammi Kapoor in Kashmir Ki Kali and Junglee respectively. He and Asha Parekh were paired together in four films, the most successful being besides debut film of Asha Parekh, the murder mystery Teesri Manzil (1966) and the romance film Jawan Mohabbat.In the early fifties he accepted serious roles in women oriented films like Shama Parwana (1954) with Suraiya, comedy flick Mem Sahib (1956) with Meena Kumari and thrillers like Chor Bazar (1954), which were all successful at the box office and in the tragic love story Mirza Sahiban with (1957) (a box office flop) opposite Shyama, but did not gain recognition and fame among the masses. Other than the above hits, he had fifteen films as flops to his credit till 1957. The other hits in late fifties included Mujrim (1958), Char Dil Char Rahen, Raat Ke Raahi (1959). His performances in K A Abbas’ Char Dil Char Raahein (1959) and Kidar Sharma’s Rangeen Raatein (1956) were also noteworthy but remained underfeted. It was only after triple success of Tumsa Nahi Dekha (1957), Ujala and Dil Dil Deke Deko (both 1959), that he became popular with the audience and became a star. In the first half of the 1960s, Kapoor was seen in successful films like College Girl, Basant, Singapore, Boy Friend, Professor, Dil Tera Diwana, Vallah Kya Baat Hai, Pyar Kiya To Darna Kya, China Town, Kashmir Ki Kali, Bluff Master, Janwar and Rajkumar. Although nominated before, in 1968, he received the first Filmfare Best Actor award of his career for the film Bramhachari. He made a unique place for himself in the industry as he was the only dancing hero in Hindi films from the late fifties till early seventies. Saira Banu said in an interview “At the time when Dilip sahab, Raj Kapoor and Dev Anand ruled the industry, it was Shammi Kapoor who created a niche for himself with his unique dance moves. He used to say he didn’t know how to dance but he would just listen to the music and feel it. He was the only ‘dancing hero’ at that time.” He used to compose dancing steps by himself in the songs picturised on him and never needed a choreographer. This earned him the name of Elvis Presley of India.