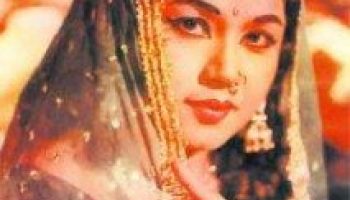 “Duniya ko laat maro… (to hell with the world),” sang nine-year-old Shakeela Bano Bhopali at the last Nawab of Bhopal’s palace innocently kicking in the Nawab’s direction, with her father nervously gesturing her to stop. But Shakeela continued to sing, never sparing the high or the mighty.

Shakeela was a rage in Bhopal from very young age. Her mother Jameela Bano was opposed to the idea and, according to Shakeela’s younger brother Anees, tied her hands and feet to scare her. But Shakeela did not relent. She joined the Variety Theatre and played lead roles. Later, when she became a big name in Bhopal, her mother learnt to play the harmonium for her.Her entry to the world of professional singing was accidental. One night, while B R Chopra was filming NAYA DAUR near Bhopal with Dilip Kumar, Vyjayanti Mala and Johny Walker, the shoot had to be cancelled due to rains. Someone suggested Bhopali’s name to Chopra who invited her to perform a qawwali mehfil. Bhopali, then barely in her teens, mesmerized the audience, and the event that was supposed to be of an hour lasted whole night. Dilip Kumar said to her:”Aap Bhopal ki cheez nahin hain. Bombay aa jaaiye (You are not Bhopal material. Come to Bombay.”
Shakeela Bano did move to Mumbai, with her parents sister and three brothers, where she rendered famous numbers like Milte hi nazar tumse hum ho gaye deewane (Ustaadon ke Ustaad), Peene waale meri ankhon se piya karte hain (Gunda), Sainyan doli leke aaye tere dwar (Shraddhanjali), Ab yeh chod diya hai tujhpe (Humrahi). “There was a time when producers would add a qawwali number by Shakila to their flop films and re-release them. One qawwali could carry a failed film,” remembers Babubhai, who was Bhopali’s assistant for 25 years.
A poet in her own right, Bhopali has a collection of poetry Ek Ghazal Aur to her credit while Akmal Hyderabadi has written a seminal book Qawwali Amir Khusru Se Shakila Bano Tak.
It is difficult for old timers to forget Shakeela. “She had both the looks and the voice. Everyone from the Nawab to the tongawallah went back happy after her performance. While the couplets were for the upper class, the jokes were for the rest,” recalls 75-year-old K. Khan, an avid fan of Shakeela from Bhopal. Shakeela had a great memory. She could effortlessly recite Ghalib’s and Mir’s couplets. To her, the couplets were always more important than her voice. Through her gestures (ada aamozi) she ensured that the couplets sank into the hearts of the listeners. Noted broadcaster Ameen Sayani, who has known Bhopali for several years, says: “Shakila had a magnificent voice and a great sense of repartee”. There are several tales about her. In the 1980s, at the peak of her career, Bhopali performed at a concert in Kuwait. A sheikh was so impressed with her that he gifted her his car. When she refused, he offered to buy her house in Dubai. But she refused that too, saying,”I love India, and I cannot think of making any other country my home”. Her admirers remember the Mallika-e-Qawwali (queen of qawwali) walking into mehfils in heavily embellished sharara-dupatta with attendants carrying her paandaan, pankha, ugaaldaan and fresh couplets she wrote.

The queen of qawwali lived life her way, never succumbing to pressure from music companies to record her qawwalis. She  defended her decision not to record qawwalis by saying “My talent lies in ada aamozi and not in my voice.” Her command over Urdu and her penchant for enacting the lines of the songs as well as her swaying dancing style made her one of the most sought-after qawaal singers of her time.”She always sang solo and held her ground alone, which was remarkable for a woman in those days,” saya a family source. Her most important contribution was in transforming qawwali from simple form of local entertainment to a lavish affair with a grand backdrop, musical orchestra and a lot of action and dance.

By the year 1984 the film offers started drying up, but she started giving lot of live performances. She was in Bhopal in December 1984 to attend a relative’s wedding. It was very late at night and some family members had already turned in. Suddenly there was a lot of noise outside. ‘Bhago, bhago (run) there is poison in the air’ people were shouting. Hordes of people were running on the streets covering their faces, shouting, pushing and falling over each other. The family got ready to escape from the house. Shakila galvanized most of the family members. She would never think of fleeing on her own, saying, ‘We all live together, we all will die together’. Zarina, Shakila’s younger sister, recounts how Shakila, who was 42 years old at the time, and 14 others fled the house on foot, joining the surging mass of people below. “People did not even know what they were running from, there was so much hysteria. Some people said Bhopal was on fire. We did not know then that it would have been better to shut the windows and stay in the house with a blanket covering our faces. People who were inside their homes did not suffer as much.” The group walked for hours at night, finally stopping when they thought they were far away.
Zarina recounts, “We returned to a ghost town in the morning. Shakila suffered acute respiratory problems only after that. In fact, she became asthmatic. She also had a lot of eye problems after the leak, which got aggravated after she developed diabetes. I remember her being unable to go through a full programme in Mumbai some months after the gas leak.” Her respiratory problems put a stop to her live performances. Says Bhopal-based Satinath Sarangi, managing trustee of Sambhavna Trust Clinic, which provides medical care to the survivors of the disaster, “Singers in Bhopal who were exposed to the gas were directly affected by the leak. Why just singers? Most people who depended on their voice for a living were affected. Even many muezzins (Muslim priests who call the faithful to prayer) lost their jobs.” Shakeela had once said in an interview that she is like a factory with 20 people’s livelyhood depending on her singing. With the factory sick, the accompaning musicians started getting paid sporadically.
A bitter and ill Shakeela Bano complained about the blind eye that the country had turned during her hard days. Bed-ridden with a tape recorder, a paanbatti (betel container) and a small box full of vials and tablets for company in her small cubicle at St George Hospital, she gazed at the ceiling blankly. Summoning all her strength, she sits up, clears her throat and says:” The Doctor asks me aur kya problem hai? I am tired of telling people what ails me.” Bhopali, who once gave singers like Noorjahan and Runa Laila a run for their money when it came to live performances spent months in different hospitals – Shastri Hospital, Mahavir Nursing Home, Holy Family Hospital and finally St George Hospital.”We have spent over Rs 2.5 lakh on her treatment. We sold our jewellery, television set and refrigerator. We are broke now.” said Zarina saman, Bhopali’s sister. Help came few and far between. Despite repeated appeals for help, the governments of Madhya Pradesh and Maharashtra and the Prime Minister’s Office have not issue any help the senior artiste. “Once we personally handed over a letter to MP chief minister Digvijay Singh, who immediately asked his PA to inquire about ammi’s health. Nothing happened. A few individuals in the film industry have given money, but that’s too small an amount to meet the cost of medicine,” rues Yunus Mohammed Khan, Bhopali’s adopted son. “I performed to raise funds for the army’s welfare, cancer patients, war widows and destitute children. What have I got in return for all the services I did for my country ? ” Shakeela said, adding “God gave me a lot of shohrat (fame), izzat (respect) and daulat (money). I am happy that I lived the way I wanted to. My only regret is I have to sit idle now. I have many offers from serials and films, but I can’t work. I just want to get well and resume my work”.
She summed up her fate with a couplet from her ghazal
“Jo shakhs mudaton mere shaidaaion mein tha/Aafat ke waqt woh bhi tamashaiyon mein tha”(One, who, for years, was among my admirers/He has became a spectator during my turbulence). Shakeela Bano Bhopali never recovered from the effects of the gas. The legendary singer, who transformed the face of qawaali with her flamboyant and uninhibited singing style, died on 16th December 2002 at the St George Hospital after a massive cardiac attack at the age of 60. frm.http://www.bhopale.com/person/shakeela-bano-bhopali
Tags: #ShakeelaBanoBhopali
Share 0
Tweet
Share
Share
Share