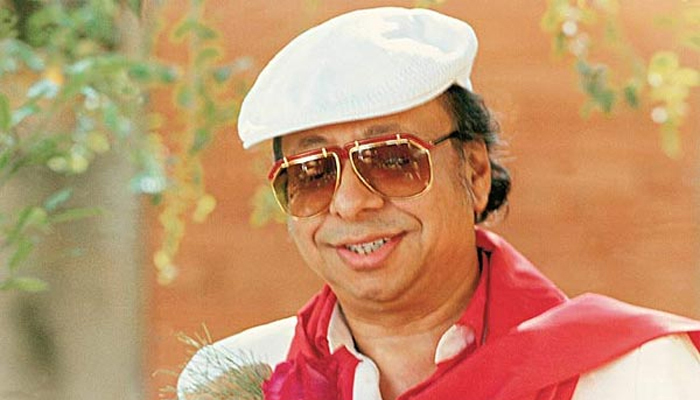 Rahul Dev Burman was a film score composer, who is considered one of the seminal music directors of the film industry.Nicknamed Pancham da, he was the only son of the illustrious composer Sachin Dev Burman.From the 1960s to the 1990s, RD Burman composed scores for 331 movies.He was mainly active in the Hindi film industry as a composer, and also provided vocals for a few of compositions. RD Burman did major work with Asha Bhosle and Kishore Kumar, and scored many of the songs that made these singers famous.He served as an influence to the next generation of Indian music directors,and his songs continue to be popular in India even after his death.RD Burman was born on 27 June 1939 in a [Tripuri] family to the well-known Bollywood composer-singer Sachin Dev Burman-(Tripuri) and his lyricist wife Meera Dev Burman-in Calcutta.Initially, he was nicknamed Tublu by his maternal grandmother although he later became known by the nickname of Pancham. According to some stories, he was nicknamed as Pancham because, as a child, whenever he cried, it sounded in the fifth note (Pa) of the Indian musical scale. The word Pancham means five (or fifth) in Bengali. Another theory says that the baby was nicknamed Pancham because he could cry in five different notes. Yet another version is that when the veteran Indian actor Ashok Kumar saw a newborn Rahul uttering the syllable Pa repeatedly, he nicknamed the boy Pancham.
RD Burman received his early education at the St Xavier’s School in Kolkata. His father SD Burman was a noted music director in Bollywood, the Bombay-based Hindi film industry. When he was nine years old, RD Burman composed his first song, Aye meri topi palat ke aa, which his father used in the film Funtoosh (1956). The tune of the song Sar jo tera chakraaye was also composed by him as a child; his father included it in the soundtrack of Guru Dutt’s Pyaasa (1957).
In Mumbai, RD Burman was trained by Ustad Ali Akbar Khan (sarod) and Samta Prasad (tabla).[9] He also considered Salil Chowdhury as his guru. He served as an assistant to his father, and often played harmonica in his orchestras.Some of the notable films in which RD Burman is credited as the music assistant include Chalti Ka Naam Gaadi (1958), Kaagaz Ke Phool (1959), Tere Ghar Ke Samne (1963), Bandini (1963), Guide (1965) and Teen Devian (1965). RD Burman also played mouth organ for his father’s hit composition Hai Apna Dil to Aawara which was featured in the movie Solva Saal (1958).
In 1959, RD Burman signed up as a music director for the film Raaz, directed by Guru Dutt’s assistant Niranjan. However, the film was never completed. The lyrics of this Guru Dutt and Waheeda Rehman-starrer film were written by Shailendra. R D Burman recorded two songs for the film, before it was shelved. The first song was sung by Geeta Dutt and Asha Bhosle, and the second one had vocals by Shamshad Begum.
RD Burman’s first released film as an independent music director was Chhote Nawab (1961). When the noted Bollywood comedian Mehmood decided to produce Chhote Nawab, he first approached RD Burman’s father Sachin Dev Burman for the music. However, SD Burman turned down the offer, saying that he did not have any free dates. At this meeting, Mehmood noticed Rahul playing tabla, and signed him up as the music director for Chhote Nawab. RD Burman later developed a close association with Mehmood, and did a cameo (apart from composing the music) in Mehmood’s Bhoot Bangla (1965).RD Burman’s first wife was Rita Patel, whom he had met in Darjeeling. Rita, a fan, had laid a bet with her friends that she would be able to get a movie-date with Burman. The two married in 1966, and got divorced in 1971. The song Musafir Hoon Yaaron from Parichay (1972) was composed by him, when he was at a hotel after the separation.RD Burman married Asha Bhosle in 1980. Together, they recorded many hit songs and also staged many live performances. Burman had financial difficulties, particularly later in his life. RD Burman died on 4 January 1994. RD Burman’s mother Meera died in 2007, thirteen years after his death.Agency