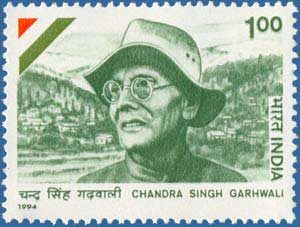 Chandra Singh Garhwali was born on 25th December, 1891 in village Ranisera (Masau), Thalisain in the district of Pauri Garhwal. He is known popularly as the hero of Peshawar Kand and thus Veer has been added to the name, Chandra Singh Garhwali. After his primary education at home he joined the India army, but even though he was serving the colonial power he remained at heart a staunch nationalist and had his sympathies with the heroes of the freedom movement. His meeting with Gandhiji and the Gandhian influence on him follows an interesting anecdote.
During India’s freedom movement Khan Abdul Gaffar Khan was leading the civil disobedience movement in the North West Frontier Province.
April 23 has a special meaning for all of Uttaranchalis. On this day in 1930, the British rulers asked Garhwal Rifles to march forward and crush an agitation on SALT SATYAGRAHA by the Balooch people (PATHANS) in Peshawar. Angered, he ordered the Garhwal Rifles to fire on the demonstrators. Chandra Singh Garhwali who was leading the unite refused to comply and told his men not to fire on the non-violent satyagrahis and he ordered a cease-fire.
For his defiance of his Commander’s orders Chandra Singh Garhwali along with 59 soldiers were arrested and court-martialed. Barrister Mukandi Lal went from Lansdown to Peshawar fought his case and saved him from the death penalty. However they were sentenced to life imprisonment and all their properties were seized. After serving this term in several jails for 11 years 3 months and 18 days, Chandra Singh Garhwali was finally released in year 1941. While he was in jail he came in contact with several national leaders.
In 1946 he returned to his village and settled down, but remained active in social movements, leaning to leftist ideology. On 1 October 1979 he died in a hospital in Delhi, after a long illness. Veer Chandra Singh Garhwali will be remembered for posterity as a brave soldier and a revolutionary, who had shown great courage, patriotism as a freedom fighter while serving as a soldier. To commemorate his contribution as a freedom fighter the India government released a postal stamp in this honor in 1994.Agency