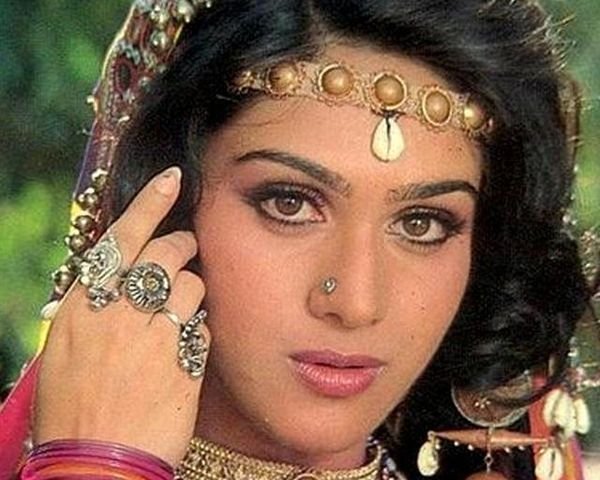 Meenakshi Seshadri ( November 16, 1963) is an film actress and dancer. She won the Miss India contest in 1981 at age 17 the youngest woman to be crowned Miss India.Meenakshi Seshadri, born as Shashikala Seshadri, made her debut in Painter Babu,Telugu/Hindi bilingual film (1982) opposite Rajiv Goswami, the younger brother of Manoj Kumar. She shot to fame with the mega hit film Hero (1983) directed by Subhash Ghai. She was nominated for a Filmfare Award for her role in the film Damini. She acted in her last film Ghatak in (1997). Meenakshi appeared in a number of films like Awara Baap alongside Madhuri Dixit and Rajesh Khanna, Bewafai alongside Rajnikant and Rajesh Khanna, Meri Jung opposite Anil Kapoor, Inaam Dus Hazaar opposite Sanjay Dutt, Shahenshah alongside Amitabh Bachchan and Mithun, Vijay opposite Anil Kapoor. Meenakshi Sheshadri had the privilege of working with the best Bollywood banners as well as distinguished actors.
Known for her angelic beauty and impeccable dance performances, Meenakshi is among the few actresses who did not stereotype their on screen image. Her magnetism would liveliness to every film she worked in.Though she was appreciated for all her films, her high came when she was paired opposite superstar Amitabh Bachchan in 1988’s Shahenshah. The film, though considered then as a flop,was a money spinner and is said to have made more money than any other blockbuster film. Her groundbreaking performance was in Damini released in 1993. Directed by famed filmmaker Rajkumar Santoshi, it also starred Rishi Kapoor, Sunny Deol, Amrish Puri, Tinu Anand and Paresh Rawal. The film was based on the sensitive subject of injustice towards a rape victim. Damini became a mega success and received a number of awards including the coveted National Film Award. Meenakshi was accolade for her versatility and display of varied set of emotions on screen.

In the 1990s, she appeared in films like Aadmi Khilona Hai alongside Govinda, Kshatriya alongside veteran actors Sunil Dutt, Dharmendra and Vinod Khanna. Meenakshi played the female lead in 1996 blockbuster Ghatak opposite Sunny Deol. Directed by Rajkumar Santoshi, it was her last film.Meenakshi Seshadri was born into a Tamil Iyengar Brahmin family in Sindri, Jharkhand.She is trained in four Indian classical dance forms: Bharata Natyam, Kuchipudi, Kathak and Odissi. She studied dance under Vempati Chinna Satyam and Jaya Rama Rao.She retired from cinema after marrying investment banker Harish Mysore.She had a civil wedding, a registered shaadi, in New York.The couple is blessed with two children, daughter Kendra and son Josh. Meenakshi lives in Plano,Texas,with a daughter, Kendra and a son, Josh.There, she teaches Bharatanatyam,Kathak and Odissi. She performs with her students at charity events and fundraisers. A philanthropist, Meenakshi and her disciples performed at the American Association of Physicians of Indian Origin (AAPI) convention in California.She had an alleged affair with Rajkumar Santoshi.Meenakshi Seshadri was nominated for Filmfare Best Actress Award for Jurm in 1991 and for Damini in 1994.She used to be knowns as one of the most beautiful actress at her peak.Agency