Sushmita Sen is an film actress, model and the winner of the Miss Universe pageant of 1994. She was the first Indian to win the crown.After completing her reign, Sen went on to pursue Bollywood. She started her career with the Hindi film, Dastak. She rose to stardom with the Tamil musical Ratchagan opposite Nagarjuna; later, she attained commercial and critical recognition for her roles in Sirf Tum(1999) and the comedy Biwi No.1 (1999). The latter earned her the Filmfare Best Supporting Actress Award. She has also acted in commercially successful films such as Aankhen (2002), Main Hoon Na (2004) – her biggest commercial success so far — and Maine Pyaar Kyun Kiya? (2005). She received critical acclaim for her female-oriented roles in films such as Filhaal… (2002), Samay: When Time Strikes (2003), Chingaari (2005), Zindaggi Rocks (2006), Aag (2007) and others.

Sushmita Sen  was born 19 November 1975   into a Bengali family in Hyderabad. Her parents are Shuber Sen, a former Indian Air Force Wing Commander, and Subhra Sen, a jewelry designer and owner of a Dubai-based store. She has two siblings, a sister named Neelam and a brother named Rajeev.She has attended Air Force Golden Jubilee Institute in New Delhi and St. Ann’s High School in Secunderabad, but did not pursue higher education.
Sushmita Sen made history by adopting a baby girl named Renée in 2000. She, as a single woman of only 25 years of age, was not viewed as socially acceptable to obtain the guardianship of the baby. However, the High Court of Bombay quashed the appeal and she obtained gain of cause. On 13 January 2010, she adopted a three-month-old girl and named her Alisah. 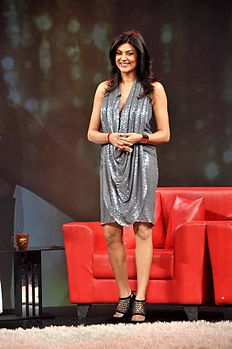 In 1994, as a teenager, Sen won the title of Femina Miss India. Sen then won the 1994 Miss Universe Pageant, held in Manila, Philippines, representing India.At Miss Universe, Sen ranked third overall in the preliminaries, right behind preliminary winner Miss Colombia Carolina Gómez, and Miss Greece Rea Totounzi, who ranked second but won the preliminary swimsuit and evening gown competitions. Sen went on to place second, fifth and third in the swimsuit, India to the Miss Universe pageant from 2010 onwards through her project I Am She – Miss Universe India.

After her reign as Miss Universe, Sushmita became an actress. Her first film, Dastak was in 1996, in which she played the victim of a stalker played by Sharad Kapoor. Mukul Dev starred as the lead actor. She then starred in the 1997 Tamil, action film Ratchagan. Two years later her appearance as Rupali in David Dhawan‘s movie Biwi No.1 won her the Filmfare Best Supporting Actress Award in 1999. Biwi No.1 was the second highest-grossing movie of 1999. The same year, she was also nominated for her role in Sirf Tum in the same category. Following her dance song in Fiza known as ‘Mehboob Mere’, she tried to make a niche for her career in the Indian film cinema.

She received critical acclaim and box office success for film Aankhen starring opposite Arjun Rampal. The film co-starred Amitabh Bachchan, Akshay Kumar, Aditya Pancholi and Paresh Rawal. So far, her biggest hit has been the 2004 movie Main Hoon Na, in which she starred as Shahrukh Khan‘s love interest. The film grossed a total of Rs 330,000,000 and was the second best selling movie of that year. Later, Sushmita played a lawyer in Main Aisa Hi Hoon opposite Ajay Devgan. In 2005, she also starred in a remake of Cactus Flower, called Maine Pyaar Kyun Kiya?: Sen played the lead opposite Salman Khan and Katrina Kaif.

Sushmita plays the role of a successful supermodel called Shimmer in Dulha Mil Gaya; the film was a moderate success that year.Agency