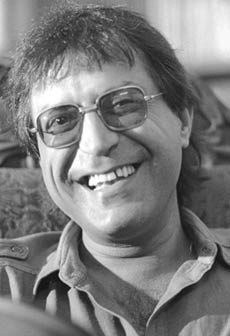 Ravi Baswani (September 29, 1946 – July 27, 2010) was a well known actor, most famous for his role in Sai Paranjpe’s Chashme Buddoor (1981) and Kundan Shah’s cult comedy Jaane Bhi Do Yaaro (1983), for which he won Filmfare Best Comedian Award in 1984. He was noted for his comic timing and underplaying of a character in the true sense of th word. In a career spanning 30 years he acted in some 30 films. He died in Haldwani, on his way to Delhi from hill station Nainital, to where he had traveled to scout for locations for his upcoming directorial feature which was also to be his debut in that role.Ravi Baswani was born and brought up in Delhi, where he later did his graduation from Kirori Mal College, Delhi University, he was also part of the KMC dramatic society at the college.He started his career in 1981 with Chashme Buddoor and did many successful films as a comedian and/or as a character artist. He also appeared very many times on Indian television. He went on to work in films like the cult Jaane Bhi Do Yaaro, Kabhi Haan Kabhi Naa, Chhota Chetan, Ab Aayega Maza and Naseeruddin Shah’s first directorial venture, Yun Hota Toh Kya Hota. As a television actor, he acted in numerous TV serials, including, the popular comedy serial,Idhar Udhar on Doordarshan in the 1980s,wherein he acted along side Pathak sisters,Supriya Pathak and Ratna Pathak. More recently he was seen in character roles in films like Bunty Aur Babli and Pyar Tune Kya Kiya. In 2004, when Film and Television Institute of India,Pune revived its acting course after 26 years,he became its coordinator and a teacher, along with Naseeruddin Shah,who also redesigned the course,Baswani however resigned the next year.Baswani died following a massive heart attack on July 27, 2010 in Haldwani (Distt. Nainital).He was returning from Nainital to Delhi,where he had to hunt for location for his directorial debut film, set in the hills. He was unmarried. 2012 Chashme Buddoor Remake ,2006 Monsoon,Anthony Kaun Hai?,Yun Hota Toh Kya Hota
2005 Bunty Aur Babli,Lucky: No Time for Love,It Could Be You ,2001 Pyaar Tune Kya Kiya ,2000 Chal Mere Bhai ,1998 Jab Pyaar Kisise Hota Hai,Chhota Chetan,Ghar Bazar ,1996 Return of Jewel Thief ,1994 Laadla ,1993 Kabhi Haan Kabhi Naa,Raunak ,1992 Jaan Tere Naam 1987 Zevar ,1986 Peecha Karro,Ghar Sansar,Love, Main Balwan,1984 Ab Ayega Mazaa ,1983 Jaane Bhi Do Yaaro,Dhat Tere… Ki ,1981 Chashme Buddoor.